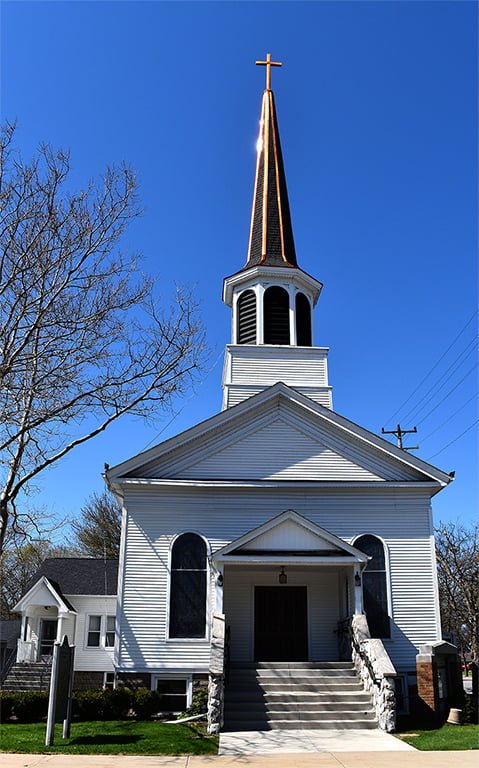 A Church with a History

In 1863, during the stormy days of the Civil War, Lutheranism had its beginning in the New Baltimore area. Seven German families made up the original congregation of St. John’s Lutheran Church, holding worship services in the home of Fritz Turkow. Five years later the worshipers moved to an old chapel which was rented from the Baptists. In 1870 the Lutherans erected this structure on property given by Gilbert Hatheway in January of 1869. Services and religious instruction were offered in German until 1916 when English was introduced with one English service a month. German services were discontinued in 1934. St. John’s houses a Hinners mechanical action organ, which was acquired in 1905. Even though over a century has passed, valuing family and community remains the same.

“To answer God’s call by Caring, Sharing, Teaching and Loving as Jesus has loved us”

Here at St. John’s, we offer a relaxed environment for worship with a friendly atmosphere. All are welcome!

(Sunday School offered at 10:15 AM Service September through May)

In 1863 seven families of German origin gathered at the home of Fritz Turkow, about one mile north of the village of Ashley (now known as the city of New Baltimore).  Along with Mr. Turkow, Albert Deng, Adolph Schroeder, August Springborn, F. Reink, K. Meier, John Losch, Carl Bars with Reverend Hahn preaching the Word of God; Lutheranism got its start in this area.

Reverend Engel led the congregation. They rented a chapel from the Baptists on Washington and Green Street.

A sacristy was added.

A reed organ was purchased.

The Ladies Aid raised funds to purchase the Hinners pipe organ which was bought for $650.00. That Hinners organ provides St. John’s with music today.

In 1916 St. John’s would experience more change. Before 1916 the church services at St. John’s were conducted in the German language, and only German. In early 1916 the congregation decided to introduce an English language service, once a month. Later the English services would be provided twice a month. The change would become controversial. May 1916- Rev. Hugo Probst was called as St. John’s Pastor in May of 1916. St. John’s was redecorated again and electric lights, new oak pews, carpets and a twelve foot expansion were added to accommodate an altar and pulpit donated by Lutherans of Port Clinton, Ohio. During this time the church was raised several feet and a well lit basement with kitchen and furnace room were added, along with sidewalks.

The women of St. John’s were given the right to vote on church matters, but could not hold elective office in the church.

Rev. O. Bertram was installed and St. John’s added a “large” assembly hall annex (presently referred to as the parlor) with basement. World War II- One of St. John’s members, Miner Roy Smith, gave his life in service to his country in World War II. He was the son of Mr. and Mrs. Ralph Smith and brother of Wilbur Smith. The cross on top of our steeple was presented in memory of Miner Smith.

During the early 1950’s Sunday School enrollments grew and St. John’s purchased the lot south of the church to build St. John’s Educational Building. The project was started in December 1954 and the cornerstone was laid on April 20, 1955. Although the building was not quite complete, St. John’s held a Dedicatory Service on October 30, 1955. The building is still in use today for Sunday School, Fellowship Dinners and many other events and meetings.

On September 15, 1963 (the 14th Sunday after Trinity) St. John’s celebrated the One Hundredth Anniversary of our congregation. The Centennial year saw the women of the church raise funds to renovate the organ. The Educational Building was also paid off and the mortgage burned on September 22, 1963 (two years early). The church purchased a “Magnebell” carillon and used its chimes for the first time on Christmas Eve services 1964.

May 8, 1964- A tornado tore through Chesterfield Twp. In response to the tornado St. John’s set up a Disaster Relief Fund to help Congregation members who were injured and suffered property damage from the tornado. Contributions came from all over: Churches, Sunday Schools, individuals from Muskegon, Flint, Imlay City, Utica, St. Clair Shores, Grosse Pointe, Richmond, New Haven, Romeo, Clawson, Marine City, Palmyra, Capac and other communities throughout Michigan, including a junior Girl Scout Troop from Detroit. Thank-you letters were sent to St. John’s from the victims of the tornado expressing the depths of their gratitude to have survived the tornado and knowing their Christian family was stepping forward to help. During the Vietnam war the Steffen family mourned the loss of family member Frederick G. Steffen, who gave his life in service to our country. A plaque in the Narthex recognizes Frederick and Miner Smith (World War II casualty) for their service to our country.

The Organ Historical Society paid tribute to St. John’s Hinners organ on May 31, 1978 holding a recital and presenting a plaque to the church. Through the persistent work of congregation member Mrs. Georgina Kristiansen, the State of Michigan, in 1979, recognized St. John’s as a historical site. The historical marker stands outside the church, one side telling the story of New Baltimore and the other side giving the history of St. John’s. A dedication program was held on November 18, 1979 in the afternoon with St. John’s Pastor Jerry Elsholz.

The church furnace was replaced, parlor redecorated and aluminum siding was installed.

The church pews were refinished, interior repainted and the organ was refurbished.

Preparations were made for the 125th anniversary of St. John’s. The celebration was marked at the October 2, 1988 church service followed by an afternoon reception.

During the 1990’s and early 2000’s: redecorated the interior of the church, added restrooms to the basement, installed an elevator system and refurbished the entrance to the church. A gazebo was placed adjacent to the Educational building.

In 2004 the Campaign for St. John’s was established to strengthen the church’s finances through planned giving, including an Endowment Fund.

New furnaces were bought in 2005 and the kitchen in the Educational Building was renovated providing a larger serving area, an additional sink and refrigerator, and a dishwasher.

In 2006 a revised Constitution for St. John’s was adopted and approved by the congregation. Through this new Constitution a number of Committees were established: Worship and Music, Service and Outreach, Christian Education, Facilities and Support, Stewardship, and the Ministry Development and Fellowship Committee

The parlor was redecorated and the restroom converted to a handicap-accessible design. The altar was moved out to allow the Pastor to face the congregation while preparing communion. The sacristy was moved to the room by the pulpit, providing more space for the Altar Guild to work. Some pews, closest to the altar and near the entrance of the church were modified to be more handicap accessible.

A beautiful butterfly garden was planted next to the church near the parlor in memory of long-time congregation member Norma Stuart.